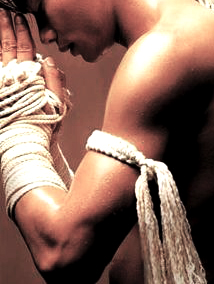 The Prajied is an armband worn by a Muay Thai fighter, throughout the whole of their fight. The characteristics of this armband vary from fighter to fighter, but in general, it is red and white and worn around the bicep. It is cloth and is meant to protect the fighter from danger and injury throughout the whole of the fight. It carries many of the same characteristics of the Mongkon, except that the Mongkon has to be removed before the fight and the Prajied is worn the entire time.

This is an amulet, not unlike the ancient amulets worn by warriors as they went into battle. While not all fighters wear a Prajied, it is traditional to wear one. Individual boxers who do not believe in the power of the amulet might not wear one, but most follow the tradition and wear the armband.

Like the Mongkon, the Prajied is an individual item. The color and the meaning vary from fighter to fighter, depending on where he was trained and the traditions that he follows. The armband shows respect to the teacher, family, and beliefs of the fighter, who is then offered protection in return for wearing the band.