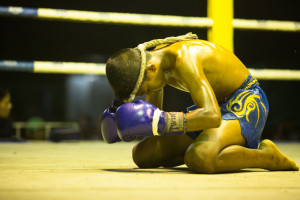 Muay Thai Mongkon
If you have ever seen a Muay Thai bout, you have probably seen at one of the fighters wearing a headband. This is called the Mongkon, and is a traditional part of any fighter’s in-ring clothing. It is representative of the fighter’s training, gym, and teacher and is believed to repel danger and injury during a fight. Those who wear them are promised prosperity and good fortune. Most fighters only wear the Mongkon during the Wai Kru Ram Muay (the traditional dance use to demonstrate respect for teachers, family, and the sport itself), and is then removed for the actual fight.

The Mongkon sprung from a tradition in the early days of Muay Thai. Back when Thailand was Siam, the early fighters would tie a bandana around their heads before going into battle. Both soldiers and sport-fighters would take part in this process. They would then complete a Buddhist chant. During this time, many trainers would pass their Mongkon onto their students, once they entered the fighting ring.

When Muay Thai was practiced almost exclusively by Buddhist monks and soldiers, the Mongkon was a symbol of a fighter’s beliefs, and would be worn even by those that did not practice Buddhism. Even Muslim fighters that would come from as far as the Middle East had their own versions of the Mongkon, sometimes inscribed with verses from the Quran.

On occasion, a fighter would sometimes weave the bones of an ancestor the hair of someone they loved into the Mongkon, to provide further protection. Many would have the headband blessed by holy men or enchanted to provide strength.

Each fighter’s Mongkon is a very personal item and many have some sort of amulet or token woven into the material. They still represent power and protection, especially during the Wai Kru Ram Muay ceremony at the beginning of a fight.

When wearing the Mongkon, there are very specific things that a fighter can and cannot do. It is considered very disrespectful to climb between the ropes of the ring, for example, while wearing the headband. It is traditional only for the teacher to touch the headband, to place it on the head of the fighter and to remove it before the fight.

Especially if the fighter is not a native of Thailand, it is important to respect the role of the Mongkon and handle it properly.